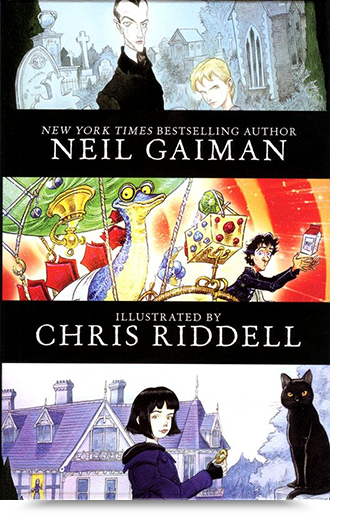 In this week’s blog post, I’m giving away the 3-Book Box Set: Coraline; The Graveyard Book; and Fortunately, the Milk, by author Neil Gaiman. Please note these are the British versions! I like this box set in particular because it is the British version and also because of the fun illustrations by Chris Riddell.

You can enter here or scroll to the bottom.

In the fall last year, I decided that it was time to bring back bedtime stories to our family. It’s such a wonderful time for us to connect and be together. It used to be part of our regular bedtime routine but managed to slip through the cracks, the year before last, when our newborn baby became deathly ill. Our baby boy had to go through thirteen surgeries, including two liver transplants in 2014–he was not expected to make it–but remarkably he did! You can read a little about his story here.

It was enough to flip our family upside down for the last couple of years, so I was extremely happy when our life began to settle down once more. I loved bedtime stories when I was a kid and I wanted to make sure that all my kids could experience the magic that my older kids had, before life got in the way! So we began with Serafina and the Black Cloak to enrich our new bedtime routine. I even got the chance to interview author Robert Beatty, the article was featured on Writer’s Digest, you can read it here.

Serafina and the Black Cloak was rather creepy and scary, and I could never of handled a tale like that when I was a kid. But my kids asked me for it repeatedly until they finally wore me down, and they loved it. So I decided to pick up this lovely Neil Gaiman box set as our next set of bedtime stories even though they have the creepy factor too. There is a wide diversity of reading ages here–I’d say, five through eight for Fortunately, the Milk; Eight through ten (or older) for Coraline, though watch out this one is a bit creepy, especially if you have a sensitive child; and The Graveyard Book, is probably about ten and up, my 15-year-old snatched this one out of my hands and devoured in a matter of hours.

My daughter loved it, and it renewed her interest in reading again. Having spiraled into the world of all things teenager, her love of reading had been put on hold for months, so I was particularly excited that The Graveyard Book inspired her thirst for reading once more.

Here is what my daughter had to say about it:

“It was a really great book! I enjoyed the characters, all the different elements, and how everything tied together. I loved the plot twists and turns throughout the story, and overall it was an exciting ride. I just wish there was more!”

Our family has been enjoying these books immensely and I think they’re fun for adult readers too, Fortunately, the Milk, may be a little on the young side, but it is stuffed full of fun and interesting illustrations.

From the Back Cover of the Book Set: 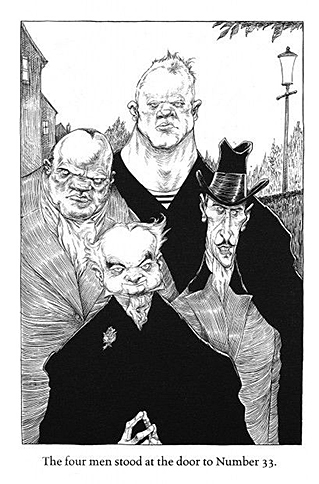 These editions, containing the British illustrations—which are both hilarious and moving—have never before been published in the United States.

From the back covers of each individual book:

Nobody Owens, known to his friends as Bod, is a normal boy. He would be completely normal if he didn’t live in a graveyard, being raised and educated by ghosts.

There are dangers and adventures for Bod in the graveyard. But it is in the land of the living that real danger lurks, for it is there that the man Jack lives, and he has already killed Bod’s family.

There is something strange about Coraline’s new home. It’s not the mist, or the cat that always seems to be watching her, or the signs of danger that Miss Spink and Miss Forcible, her new neighbours, read in the tea leaves. It’s the other house—the one behind the old door in the drawing room. Another mother and father with black-button eyes and papery skin are waiting for Coraline to join them there. And they want her to stay with them. Forever. She knows that if she ventures through that door, she may never come back…

Mum’s away. Dad’s in charge. There’s no milk. So Dad saves the day by going to buy some. Really, that’s all that happens. Very boring. YAAAAAAAWWWN. There are absolutely definitely none of the following inside: Globby Green Aliens! Intergalactic Police! Pirates! Angry volcano gods demanding human sacrifice! And most definitely NOT a time-traveling hot-air balloon piloted by the brilliant Professor Steg…

Use the Rafflecopter widget below!

The giveaway will run till February 15th at midnight (EST). 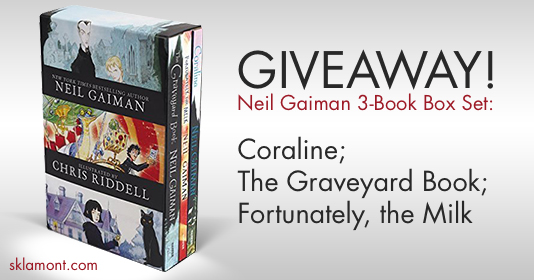 Who has been your most memorable character or characters, and why?

• Do You Use All Five Senses — Do Your Characters? 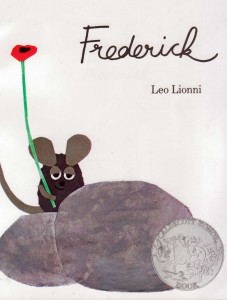 So I’ve decided to give this blogging thing a go, I had been debating the idea of whether or not I should for some time and what I could possibly blog about.

I have been toying with an idea for a little while now, about my blog focus or theme and there’s an idea that will not leave me alone.

There was a book I read as a child, or was read to, called Frederick by Leo Lionni, it was a very simple child’s picture book, but it moved me.

Frederick lives in a wall with his mouse family and winter is coming. His family frantically hunts and gathers supplies for the coming winter, whereas Frederick sits on the wall and absorbs the sun’s rays and the vibrant colors of summer. His family asks him why he does not work with them in collecting supplies for winter. His answer is pretty simple.

It may not be winter yet, but I have collected many memories for those cold dark days.

I intend to share some of them here, just call me Frederick!

Are there any cherished books from your childhood that resonates with you, either as a reader or a writer, or both?

I’d love to hear from you about any special book memories that you have, share your stories in the comments box below!

•Forged in the Fire